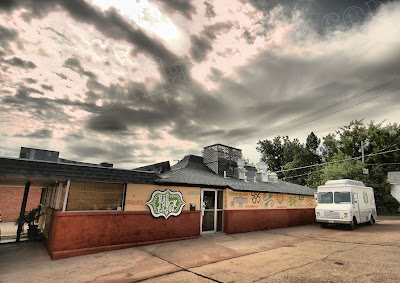 Early Saturday morning and I was hungry, wanted to check out what the buzz was all about so the wife and I headed to NW 23rd and Dewey to Big Truck Tacos. I wanted me some breakfast.
We arrived around 10 a.m. and the parking lot was 75% full. We were able to grab a menu and step right up and order our breakfast. The wife went with the bacon egg and cheese taco while I thought about a burrito with potato egg and cheese but settled for a taco instead.
While we waited for the food, I surveyed the rather small dining area, it only seats a couple of dozen people at the most. There were some frat boy types sitting at a table swapping stories, a couple eating quietly in the corner, and three people standing in line getting ready to order. I barely had time to soak it in when the food arrived.
Breakfast looked great, however my wife remarked, "I thought with a name like Big Truck Tacos we were going to get a taco that was .... well 'Big"." I just shrugged and took a bite out of the taco (it was five inches, maybe six at the most) and chewed quietly.
"Maybe it's called Big Truck Tacos because it's big on taste," I countered. Mine was really good. On the table there was a green sauce and a red sauce. I grabbed both and squirted them on my taco. Both were quite delicious, lots of flavor and not much heat. A couple of more squirts and a couple of more bites and I was finished. The wife assured me hers was quite good as well.
We grabbed the tray, dumped the trash and bolted out the door. The whole dining experience took less than ten minutes. Our tab was $7.04 and that included one drink. At $2.50 each, I was a little disappointed with the size but the flavor made up for it. Next time I'll order the $4 burrito instead. Definitely would try them for lunch some time.

Hello, you have a really beautiful pictures!!!

What kind of camera you have?

Are you using any especial software?

Please let me know at picaysabe@gmail.com